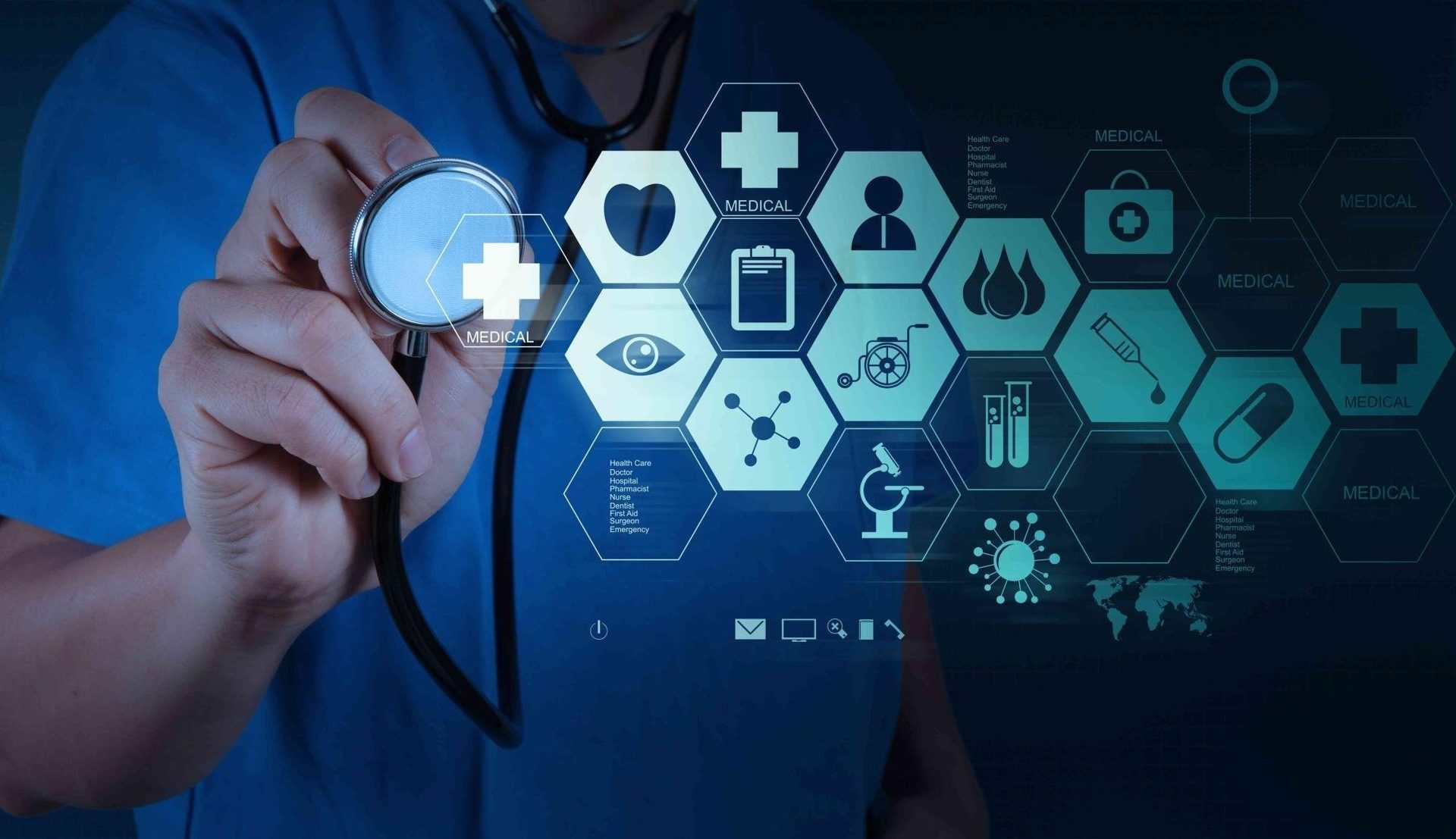 Finding the Common Pathways to All Types of Cancer

My Discovery of the Natural Killer Cell

In 1972, I presented a poster session with my major Professor, Dr. Bob Leif, at the annual Reticuloendothelial Society Meeting. On my poster, I presented on very unusual cells from the spleen (and later from the lymph nodes) of non-immunized mice that destroyed sheep red blood cells (SRBC) on contact. I came very close to publishing the article in Science which took some time and effort, but the conclusion was that it was more suitable for the immunology journals. The papers were accepted in the Journal of Immunology. I did not know the proper name for these cells but was able to develop a way of enumerating them, determine their density and enrichment in linear bovine serum albumin gradients and study their morphology utilizing light, scanning electron and transmission electron microscopy. Many years later, I developed a clinical application by in vitro enriching natural killer cells for infusion into patients. Currently, I am investigating natural substances that are supposed to increase the natural killer cell response. Unlike complement mediated IgM antibody destruction of SRBC, which showed lyses of "plaques" of SRBC appearing as deflated balloons (Fig. 1), the complete destruction of the SRBC did not require prior immunization with SRBC or complement (Fig. 2). Thus, I gave them the name "complement independent plaque-forming cells" (CIPFC) or "rough lymphocyte plaque-forming cells" when I was able to perform scanning electron microscopy (SEM). Later, Heberman (1973) and Oldham (1973) used the term "Natural Killer Cell". 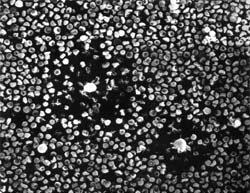 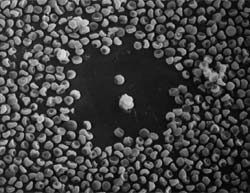 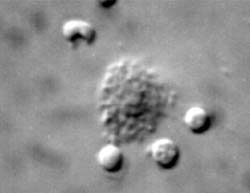 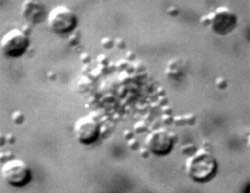 Figures 3 and 4 showing Nomarski optics of the binding of complement independent cells (left) and cytoplasmic "blebbing" of the target mouse P815 plasmocytoma cells from lymph nodes of non-immunized mice.

Working with Marilyn Cayer, we were able to section en face the alcian blue areas and perform electron microscopy. 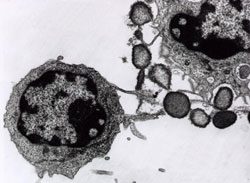 Natural killer (NK) cells are antigen nonspecific lymphocytes which recognize foreign cells of many different antigenic types. These cells are an important first line of defense against newly malignant cells and cells infected with viruses, bacteria, and protozoa (Natural Killer Cells). About 5 to 16 percent of the total lymphocyte population contains natural killer cells. NK cells have the ability to attack foreign cells without first having to recognize specific antigens; a characteristic lacking in CD4+ lymphocytes (Stine, 1997). Similarities in development, morphology, lytic mechanism and cell-surface phenotype indicate that NK cells and cytotoxic T cells are closely related lineages. The effector functions of both types of cells are controlled by MHC class I glycoproteins, and both express receptors that bind these glycoprotein molecules. The main difference between the two cells is that cytotoxic T-cells recognize infected cells by the peptides their MHC class I molecule present, while NK cells look for the absence of MHC class I molecules. It has been proposed that NK cells complement cytotoxic T-cells by taking charge in situations where MHC class I expression is hindered through the effects of virus infection (Nature, 1995).

NK cells have evolved a mechanism for mediating host defense against infection with viruses by having the ability to distinguish infected from uninfected cells. Although the exact mechanism is not clear at the present time, one possible mechanism may be that NK cells selectively kill target cells bearing low levels of MHC class I molecules on their surface. Natural killer cells have two types of surface receptor which aid in distinguishing infected from uninfected cells. The first receptor, NKR-P1, recognizes a wide variety of carbohydrate ligands found on many cells. The activation of NK cells to kill normal cells displaying these ligands is prevented by a second receptor, a C-type lectin, which binds to MHC class I molecules and inhibits NK activity (Janeway-Travers, 1996). NK cells kill target cells by releasing perforin which damages the target cell membrane and results in death of the cell. Inducing apoptosis in the target cell is another mechanism NK cells utilize to kill infected cells (Natural Killer Cells). If the specific functions of NK cells malfunction or are killed themselves, an important component of the immune attack is destroyed.

Most of the studies related to the immune system and HIV concentrate on T lymphocytes, B lymphocytes, and antigen-presenting cells. However, studies reported so far have found that NK cells can be lethally infected by HIV, and NK cell cytotoxic functions are impaired during the course of infection (Dissection). In 1989, a researcher by the name of Paolo Lusso discovered that infection with herpesvirus-6 can cause a decline in the body's natural killer cell response. This was the first time researchers have shown that natural killer cells were vulnerable to any kind of viral attack. It was also the first real evidence that infection with this herpesvirus might play a role in AIDS. In the same year, Lusso's team also showed that herpesvirus-6 attacks CD4+lymphocytes (Science News, 1993). As mentioned earlier, CD4+lymphocytes are the primary targets of HIV.

Although natural killer cells do not normally produce the CD4 molecule and are typically resistant to HIV's attack, herpes-infected natural killer cells were found to manufacture the CD4 receptor molecule that provides an entrance for HIV. Experiments have shown that when HIV was added to cultures of herpes-infected natural killer cells, HIV was able to infect those cells (Science News, 1993). So although NK cells cannot be infected by HIV as a normal functioning cell, once it is infected with herpesvirus-6 it manufactures the CD4 receptor which makes it a primary target of HIV. The consequence of NK cells becoming infected with HIV results in an increase in malfunctioning NK cells along with a decline in the natural killer cell response; rapidly leading to the development of AIDS.

These cells are sometimes called large granular lymphocytes (LGL's). NK cells have some surface markers in common with T cells, and they are also functionally similar to cytotoxic T lymphocytes (CTL's). Like CTL's, NK cells are particularly important in the killing of cellular targets (usually tumor cells). Unlike CTL's, however, the killing by NK cells is nonspecific, they do not need to recognize antigen/MHC on the target cell. NK cells do not have a T cell receptor and are not T cells.

An NK cell kills a target cell by releasing perforin (and other molecules) which damages the target cell membrane leading to death. NK cells also cause death by inducing apoptosis in the target. The cytokine TNF alpha is released by the NK cells and may be involved in this process.

Natural killer (NK) cells are well known for their ability to kill certain tumors. However, it is now appreciated that NK cells have a significant role in host defense against invading pathogens, particularly intracellular organisms, and are capable of in fluencing the specific, acquired immune response. The ultimate goal of our work is to elucidate the function of NK cells in normal and abnormal immune responses and to derive targeted therapeutic interventions that influence these innate effector cells.